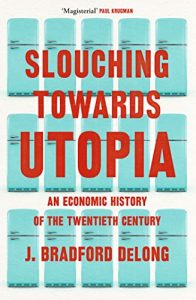 Utopias are, by definition, the be-all and end-all.

The history of the long twentieth century cannot be told as a triumphal gallop, or a march, or even a walk of progress along the road that brings us closer to utopia. It is, rather, a slouch. At best. …Slouching, however, is better than standing still, let alone going backward.

In 1870 a major shift took place for humanity. With the coming of the industrial research lab, the modern corporation, and truly cheap ocean and land transport and communication, we went from a world in which economic patterns formed a semistable backdrop of grinding mass poverty to one where the economy was constantly revolutionizing itself, entering into states of increasing prosperity via the discovery, development, and deployment of new technologies.

Thus I see the history of the long twentieth century as primarily the history of four things—technology-fueled growth, globalization, an exceptional America, and confidence that humanity could at least slouch toward utopia as governments solved political-economic problems.

The laboratory, the corporation, global transportation, global communications, and falling barriers—together, these factors were more than enough to trigger the decisive watershed and carry humanity out of Malthusian poverty.

And yet, after World War II, the world, or at least the global north, picked up its mat and walked—nay, ran—forward toward true utopia.

In some sense, I am more optimistic.

I feel inadequate to this task; writing my blog post on this important book.

For 24+ years, I have presented synopses every month of business books at the First Friday Book Synopsis in Dallas.  In November, I presented my synopsis of Slouching Towards Utopia: An Economic History of November Twentieth Century by J. Bradford DeLong.  J. Bradford DeLong, an economic historian, is a professor of economics at the University of California, Berkeley. He was a deputy assistant secretary of the U.S. Treasury during the Clinton administration. He writes a widely read economics blog, now at braddelong.substack.com. He lives in Berkeley, California.

This book is a big book.  It is a big, big picture book.  It covers plenty of ground that was new to me.  And, to be honest, I felt a little overwhelmed by its scope and breadth.  In other words, I felt inadequate to the task of presenting a synopsis of this important book.

And, it is indeed important!  I think we need to understand the big picture of our economic history over the last few decades.  I am glad I read this book.  I encourage you to add it to your reading stack, and read it slowly.  (It is not a book to skim or speed read!)

As always, in my synopses, I ask “What is the point? of the book.  Here is what I said is the point of this book: We made great progress for many (most) people on planet earth during the long century from 1870-2010.  Will we continue to?  Are we still slouching toward utopia?

#1 – This is a comprehensive economic history of the last 150 years.

#2 – This book is filled with insight about how we were able to make great progress.

#3 – This book is a warning of current and coming dangers, while also pointing to possible ways to move forward towards utopia, in the coming years.

I always include a few pages of quotes and Excerpts from the book—the “best of” Randy’s highlighted Passages.  Here are quite a few of the best of the best I included for this book:

A revolutionized economy every generation cannot but revolutionize society and politics, and a government trying to cope with such repeated revolutions cannot help but be greatly stressed in its attempts to manage and provide for its people in the storms.

People can and do use technologies—both the harder ones, for manipulating nature, and the softer ones, for organizing humans—to exploit, to dominate, and to tyrannize.

RETURN TO MY CLAIM above that the long twentieth century was the first century in which the most important historical thread was the economic one. That is a claim worth pausing over.

John Stuart Mill claimed, with some justification, that “it is questionable if all the mechanical inventions yet made have lightened the day’s toil of any human being.” You have to go forward a generation after 1870 before general material progress becomes unquestionable.

To listen to music on demand in around 1900 you had to have—in your house or nearby—an instrument, and someone trained to play it.

Economics during the twentieth century has worked just shy of miracles.  … Today, less than 9 percent of humanity lives at or below the roughly $ 2-a-day living standard we think of as “extreme poverty,” down from approximately 70 percent in 1870.

Today, the typical citizens of these economies can wield powers—of mobility, of communication, of creation, and of destruction—that approach those attributed to sorcerers and gods in ages past.

The numbers are important: indeed, they are key. …the secret weapon of the economist is the ability to count.  …individual stories are only important if they concern individuals at a crossroads whose actions end up shaping humanity’s path, or if they concern individuals who are especially representative of the great swath of humanity. It is only by counting that we can tell which stories are at all representative and which decisions truly matter.

With even moderately well-fed people, human sexuality can and does do much more: British settler populations in North America in the yellow-fever-free zone north of the Mason-Dixon Line quadrupled by natural increase along every one hundred years, without any of the advantages of modern public health.

They produced new and better ways of doing old things: of making thread, of weaving cloth, of carrying goods about, of making iron, of raising coal, and of growing wheat and rice and corn. Having pioneered these improvements, their inventors then set about finding ways to exploit them. It was a process that required inventors to be not just researchers but development engineers, maintenance technicians, human resource managers, bosses, cheerleaders, marketers, impresarios, and financiers as well.

Consider the invention of the steam engine in the eighteenth century. It needed a cheap source of fuel, it needed something important and profitable to do, and it needed societal competence at the metalworking technological frontier.

What changed after 1870 was that the most advanced North Atlantic economies had invented invention. They had invented not just textile machinery and railroads, but also the industrial research lab and the forms of bureaucracy that gave rise to the large corporation. Thereafter, what was invented in the industrial research labs could be deployed at national or continental scale. Perhaps most importantly, these economies discovered that there was a great deal of money to be made and satisfaction to be earned by not just inventing better ways of making old things, but inventing brand-new things. Not just inventions, but the systematic invention of how to invent. Not just individual large-scale organizations, but organizing how to organize.

The economist Robert Gordon wrote of “one big wave” consisting of everything from flush toilets to microwave ovens, after which the low-and even the moderate-hanging fruit of organic chemicals, internal combustion engines, and electric power had been picked and technology was bound to slow.

…But it was not just steel. Robert Gordon was 100 percent right when he wrote that the year 1870 was the dawn of something new in the world, for over the next several decades, “every aspect of life experienced a revolution. By 1929, urban America [had] electricity, natural gas, the telephone, and clean running water,… the horse had almost vanished from urban streets,… and the household… enjoyed entertainments… beyond the 1870 imagination.”

…From the railroad and the steel mill as the high-tech edge of the economy in 1870, to the dynamo and the motor car as the high-tech edge in 1903, to the assembly line and the aircraft of 1936, to the television set and rocket (both moon and military) of 1969, to the microprocessor and World Wide Web of 2002—technological revolution, with its economic and then its sociological and political consequences, problems, and adjustments, came faster and more furiously than in any previous age.

In 1914 perhaps two-thirds of nearly all humans still tilled the earth to grow the bulk of the food their families ate. Most humans could not read; nor had they seen a steam engine up close, traveled on a railway train, spoken on a telephone, or lived in a city. Life expectancy was still little higher than it had been in the Agrarian Age.

But by the time Adolf Hitler’s Nazi Germany went to war in 1939, four-fifths of the wheeled and tracked vehicles in his army were still powered by horses and mules.

As Eisenhower put it, “Should any political party attempt to abolish social security, unemployment insurance, and eliminate labor laws and farm programs, you would not hear of that party again in our political history.”  Voters, in other words, distrusted politicians who sought to cut these programs back, and tended to find taxes earmarked to support social insurance programs less distasteful than other taxes. Outside of the United States, right-of-center parties have seldom made any serious attempt to take a stand against social democracy.

By 1946 Walter Reuther was head of the UAW, following a strategy of using the union’s power not just to win higher wages and better working conditions for its members, but to “fight for the welfare of the public at large… as an instrument of social change.

The United States’ social insurance state turned out to be significantly less generous than the typical European iteration.  …Even the conservative Margaret Thatcher in Britain found the absence of state-sponsored medical care in the United States appalling, and even barbarous.

Four forces in particular led to things playing out the way they did. The first was post–World War II reglobalization: the reversal of the step backward away from the 1870–1914 globalization that had taken place over the period 1914–1950. The second was a big shift in technology: starting in the mid-1950s, the steel-box shipping container conquered the world. The third was another big shift in technology: the nearly ethereal zeros and ones of information technology conquered the world. The fourth consisted of the neoliberal policies themselves and how they interacted with the other three. Together these four forces turned reglobalization into hyperglobalization.

And then, in my synopses, I include some key points from the book.  Here are a number from Slouching Towards Utopia:

And I end with my own Lessons and Takeaways.  Here are my 5 lessons and takeaways for this book:

#2 – Things can get worse…pretty quickly.  Therefore, we have to care about big picture issues, and be vigilant.

#3 – I think maybe we should be very concerned about the collapse of globalization. – It really is better for countries to work together.

#4 – Inequality is very real – and genuinely harmful.  We need to pay plenty of attention to this challenge.

#5 – Uncertainty makes us…uncertain.  The loss of stability and certainty is a loss to be especially mindful of.

I believe that we read books for different reasons.  But reading to learn is always at the top of my list for choosing a book to read.  I read Slouching Towards Utopia, and learned much.  I encourage you to do the same.

You can purchase our synopses presentations from the buy synopses tab at the top of this page.  On that page, you can search by book title. And click here for our newest additions. My synopsis of Slouching Towards Utopia will be available soon.

Each synopsis comes with my comprehensive, multi-page synopsis handout, plus the audio recording of my presentation delivered at the First Friday Book Synopsis in Dallas.