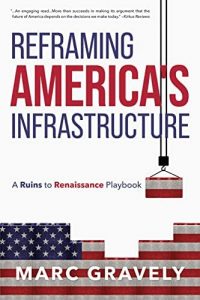 My point is simple: we live as dependents on a vast, interconnected web of roads, bridges and other connective devices. Infrastructure is the connective tissue of civilization. (From the Foreword by Norm Pattis).

Gravely is a big-picture kind of guy. (From the Foreword by Norm Pattis).

Much of modern American infrastructure still reflects that of ancient civilizations in both purpose and design. …Highway systems and ports transport goods and people between cities. Dams provide water and power, bridges and tunnels bypass geographical obstacles. Throughout recorded history, the success of each city and its country has been heavily contingent on the strength and adaptability of its infrastructure.

“This is our history—from the Transcontinental Railroad to the Hoover Dam, to the dredging of our ports and building of our most historic bridges—our American ancestors prioritized growth and investment in our nation’s infrastructure.”—Cory Booker

Beyond our position as a nation—and just as important—American infrastructure connects our people and businesses. We rely on it for safety, productivity, social interaction, education, and entertainment. Infrastructure is community.

Of all the crumbling, aging infrastructure in America, dams pose perhaps the biggest physical threat to public safety. A collapsing bridge could hurt or kill dozens or hundreds of people; a blowout of a major dam near a population center could easily impact thousands.

“It is both a sad and a happy fact of engineering history that disasters have been powerful instruments of change. Designers learn from failure.”—Edward Tenner

We live in an era of tremendous opportunity, but if our infrastructure lags, we’ll miss the train.

It is important not to confuse impact with immediate results.

Take a moment, and think about your drive home.  Do you cross a bridge?  Do you know what shape the bridge is in?  Are there any potholes in your neighborhood; even on your street?  How about water drainage after a heavy rain?  And, by the way, is your tap water fully safe to drink? How well does your electric grid hold up when stressed? – Oh, and how’s your internet connection?

These are just a few of the elements that make up the infrastructure of your world.  And, I have some bad news.  Our infrastructure is not in all that great a shape.

Recently I presented my synopsis of Reframing America’s Infrastructure – A Ruins to Renaissance Playbook by Marc Gravely for a group of forward-thinking city leaders.  This was a “custom-order” synopsis.  It’s a book I knew nothing about.  It’s a book I likely would have never selected for my First Friday Book Synopsis event. But, I am really glad I read it.

OK…maybe not so glad.  Because after reading it, I am a little unsettled…

I suggest that you let this book hit your “maybe I should read this” radar screen. You will learn.  And, you will think…

As always in my synopsis, I began with What is the point?  Here it is for this book:  Our infrastructure is seriously obsolete, dangerous, and inadequate. We need to invest seriously large sums of money, over the long haul, to remedy this situation.

#1 – This book provides an education in the history of infrastructure, going back… millennia.

#2 – This book provides an expansive look at just what all falls under the umbrella of infrastructure.

#3 – This book provides a comprehensive list of problems facing us as we seek to modernize, upgrade, and simply fix, our infrastructure.

I always include a few pages of Quotes and Excerpts from the book – the “best of” Randy’s highlighted Passages.  Here are a few of the best of the best from  this book:

While a packhorse on land could carry a mere fraction of a ton, placing goods on a barge in a transport canal allowed one horse to pull a 30-ton load.

Just as irrigation channels and waterways urged the formation of social roles and government systems within civilizations, the wheeled wagon prompted the earliest forms of infrastructure investment. No matter how wealthy the city or the number of chariots, a chariot is no good without a road. And the chariot owner alone cannot construct and maintain it. Naturally, infrastructure investment was followed by the need for institution building to assist development—organizational building to “improve the functioning of society by creating, strengthening or changing the way people relate to one another in the context of public action and public activities.”

Perhaps the most trademark characteristic of the Renaissance was a significant shift in thinking. …freedom of expression and an open mind allowed the naval and military engineer Leonardo da Vinci to spend his time creating, recording his experiments and findings on flying machines, self-propelled tanks, alarm clocks, two-tier cities, and diving equipment in private journals. Da Vinci’s concepts on canal locks and flood control are still used today.

Infrastructure was instrumental to the building of our nation. Canals, roads, railroads, and advances in communications technology helped the U.S. colonies survive and expand.

Before the Civil War, John C. Calhoun urged Congress to “bind the Republic together with a perfect system of roads and canals.”

In the 18th century and in the 21st, there has never been any promising road to progress other than infrastructure.

By his second inaugural address, Jefferson asked Congress to contribute all budget surpluses to “rivers, canals, roads, arts, manufactures, education, and other great objects within each state.”  At this point, canals, roads, and bridges were typically privately owned but required government charters, meaning the government could set hours and rates.

By the late 1800s, mail, telephone, and railroads had enabled companies like Sears and Roebuck to expand their business through mail-order catalog and delivery endeavors.  pg. 33

Roosevelt sought to reactivate the economy through large infrastructure projects. The idea was not centered on building needed infrastructure, but on creating jobs and putting money on the street.  …Through the National Industrial Recovery Act, Roosevelt vowed to create a million jobs without putting money into financially unsound projects. The economist John Maynard Keynes theorized that if the government injected money into society through infrastructure projects, it would eventually come back in the shape of taxes and other indirect returns. …Roosevelt’s New Deal transformed the nation.

Bridges are not designed to last forever.

“Climate change is killing Americans. Wildfires, heat waves, mudslides, hurricanes, and floods lead to hundreds if not thousands of deaths every year. But those are only the direct fatalities.”—Annie Lowrey

All of the Los Angeles-area dams along the San Gabriel River are deemed “high hazard dams” by federal and local safety officials. The “high hazard” classification is used for dams whose failure could likely cause loss of life and massive property destruction. This is not an unusual designation to have.

In some states, such as Missouri and Texas, regulations allow thousands of smaller dams to go without inspection at all. Only about half of dams in Texas are regularly inspected by state officials, and only about 650 of more than 5,000 dams get the same treatment in Missouri, according to the Associated Press.

To err, as we all know, is human. To persist in the most egregious error, to deny that an error has been made, and to tell the victims of that error to be silent and obey, well, that requires bureaucracy.

While money has been dedicated to renewable production, funds have been lacking for “upgrades and replacements of aging transmission infrastructure, system hardening, and resilience measures that minimize impacts from catastrophic events, improvements to comply with evolving transmission reliability and security compliance standards, and expansion of the transmission system to integrate renewables and natural gas have contributed to the increase in transmission spending.”

Physical infrastructure assets are usually built as units, a new train station, a new bridge or dam, a new highway. But none of these projects exist in isolation. They are part of complex systems and networks, and we cannot evaluate their impacts without considering each system as a whole.

The current Chinese President and his predecessor both studied engineering, so they were naturally keen on innovation in their field. …The American public has more often elected lawyers to rule over our nation.

Writing in The Atlantic, Michael Schuman recently argued that “the contest over electric cars is a proxy war between the West and China, between their economic models and political ideologies.” For Schuman, if China becomes the global leader in the autonomous technology revolution, this will be a terrible blow for America’s free-market philosophy.

What we can learn from China, it appears, is that if we support our extraordinary innovators with the infrastructure and funding they require, China will be the one that lags behind.

In 1990, there were only ten cities in the world with a population of over 10 million. Today, there are more than 30. By 2050, there will be about 50 megacities, the majority of which will be in Asia, South America, and Africa.

Abraham Maslow once said, “In any given moment, we have two choices: step forward into growth or step backward into safety.”

“For an economy built to last we must invest in what will fuel us for generations to come. This is our history—from the Transcontinental Railroad to the Hoover Dam, to the dredging of our ports and building of our most historic bridges—our American ancestors prioritized growth and investment in our nation’s infrastructure.”—Cory Booker, U.S. Senator for New Jersey

America cannot thrive and stay competitive with a crumbling and outmoded infrastructure. The world is changing faster than ever before, and we must act now.

Acting to prevent and mitigate future global warming now will result in lower societal costs and other benefits such as improvements in quality of life in the near term while providing for the prosperity of future generations and the preservation of America’s legacy as a leader among nations in the long term.” …They concluded that whatever the outcome, whether climate change actually occurs or not, the safest bet is to assume it is going to happen, an attitude that might eventually help us avoid catastrophe. In other words, the risk of doing nothing about climate change is just too high.

In my synopses, I then include key points and principles and information from the book. Here is quite a bit of what I included in this briefing. (Note, in this section of this post, words in italics come directly from the book):

Here are my five Lessons and Takeaways

#1 – Infrastructure is central to all of life; especially because we live in such a connected, highly-populated city/state/country/world.

#3 — We really are going to have to spend a very, very large sum of money to bring our infrastructure up to speed.

#4 – Partly, we just need to kind of survive until technological breakthroughs arrive in time to solve the big problems.

#5 – We really will need to work together, in spite of our differences, to implement needed solutions.

I suspect that if I were to read a few more books about our infrastructure, I would learn more.  But, since this is not my area of study, this book gave me plenty to think about. I learned much.  And, I think I am going to pay more attention to our infrastructure needs.  I think you might want to do that also.

After all, our future pretty much depends on our infrastructure.

Now, would someone please fix the potholes in my neighborhood?!